The material shown below was mostly prepared around 2003 – 2008 and is now well out of date.  We are in the process of repairing the dead links.

Many stations, including  WWV,  WWVB  and  WWVH,  are still operational and provide high quality time information 24/7  if you need it.  WWVH is easy to receive in Australia at night.  Full information is at the NIST Radio Stations web site. 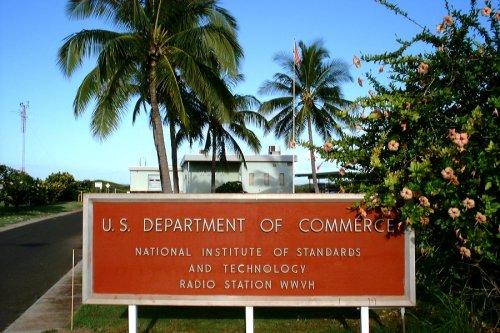 Please also note the paragraph on the history of the Australian Time and Frequency Standard Station VNG that operated from 1964 – 2002.

Short Wave Radio Standard Time signals have long been a favourite tool for scientific workers and observers at field sites, where medium accuracy time is needed, to be recorded continuously.  At times of good radio propagation, any simple radio with a SW band can be used to pick up a usable signal.  In addition to time pips, the SW signal usually also gives voice or coded time (Hour and Minute) information and station ID.  The most suitable source of standard time signals in the South Pacific is WWVH, broadcasting from Hawaii.

An interesting issue is the ‘as received’ accuracy of time signals, far away from their transmitter site.   For example, the WWVH signal from Hawaii may arrive in Australia with a propagation delay of the order of  0.05 second (approx. 50 ms).  When VNG was still operating, you could ‘just’ hear this difference between the local VNG pips and the Hawaiian WWVH pips by running two receivers.

When VNG was still available, the receiving equipment could be any cheap old analogue (second hand shop) battery operated portable.  Since the closure of VNG on 31 December 2002, the SW time signals available in the South Pacific have to travel from Hawaii, mainland USA, Canada or China.  The received signal strength in New Zealand and Australia is lower and more variable than that from VNG, making reliable reception more difficult.  In good conditions, however, the WWVH signal strength can still be remarkably good for a few hours.  To improve the performance of your receiver, it is worth experimenting with long and short extension aerials.  Try different antenna compass orientations, and stay away from power and cable TV cables and electric fences, all known sources of noise and interference.   Short Wave radio can still be a useful, adequate, low cost entry point into fairly respectable timing.

WWVH (Hawaii) and WWV (Colorado)
WWVH and WWV broadcast on the international time standard frequencies of   2.5,  5,  10,  15  and 20 (WWV only) MHz.  In New Zealand and Australia 5 and 10 are the best at night, 10 and 15 (on rare occasions also 20 MHz) in the daytime and early evening.  Mostly, WWVH is received at the best signal strength, with WWV faintly in the background, but at times WWV is almost as good.   WWVH is a extremely reliable and respected service.  The Hawaiian service started in 1948 and between 2000 and 2007 a full set of new technology fibreglass encased antennas was built on Kauai, suggesting that the service is to continue for the coming years.

(Currently, in 2002, there appears to be a severe interference problem in Western Australia with many Indonesian fishing vessels using 10 MHz as their communication channel, ignoring international regulations.  This “chatter” is noticeable as far as South Eastern Australia, but WWVH is mostly still “usable” there.)

The voice time announcements (female for WWVH, male for WWV) are just before each minute, other space and earth weather information, geophysical alerts and GPS satellite status reports are broadcast at set times.  For timekeeping ignore the ongoing continuous tones on WWV/WWVH which are often heard from second 1 (i.e. the tones start one second after the full minute) until second 45.  The complete format descriptions of the WWVH and WWV time codes can be found at the NIST web site.

On CHU the 29th and 51st to 59th Second Markers are omitted, and alternating bilingual voice announcements of local time (not UTC) are made between seconds 50 and 59.  There are further complex time codes built into this signal between seconds 31 and 90 – for details see the Klaus Betke site.  However, we find that:  if CHU is present,  WWVH or WWV are most likely stronger, and preferred for their easier to read time code system.  Also Hawaii (the source of WWVH) is closer to New Zealand and Australia than Ottawa, so that there is less propagation delay.
Do not use time pips on major international SW broadcast stations (e.g. the BBC)
Do not rely on time signals on large international SW broadcast stations (e.g. the BBC, RN, DW), which broadcast time pips on the full hour.  The problem is that these SW (HF) broadcast programmes are distributed around the world using extremely long paths and variable networks that often include satellite links which add very large delays.  As received, they can be significantly delayed.  An exception is   Radio New Zealand International   (RNZI), as this only has one local transmitter. The signal from RNZI would therefore be similar to that from the regular domestic NZ broadcast.